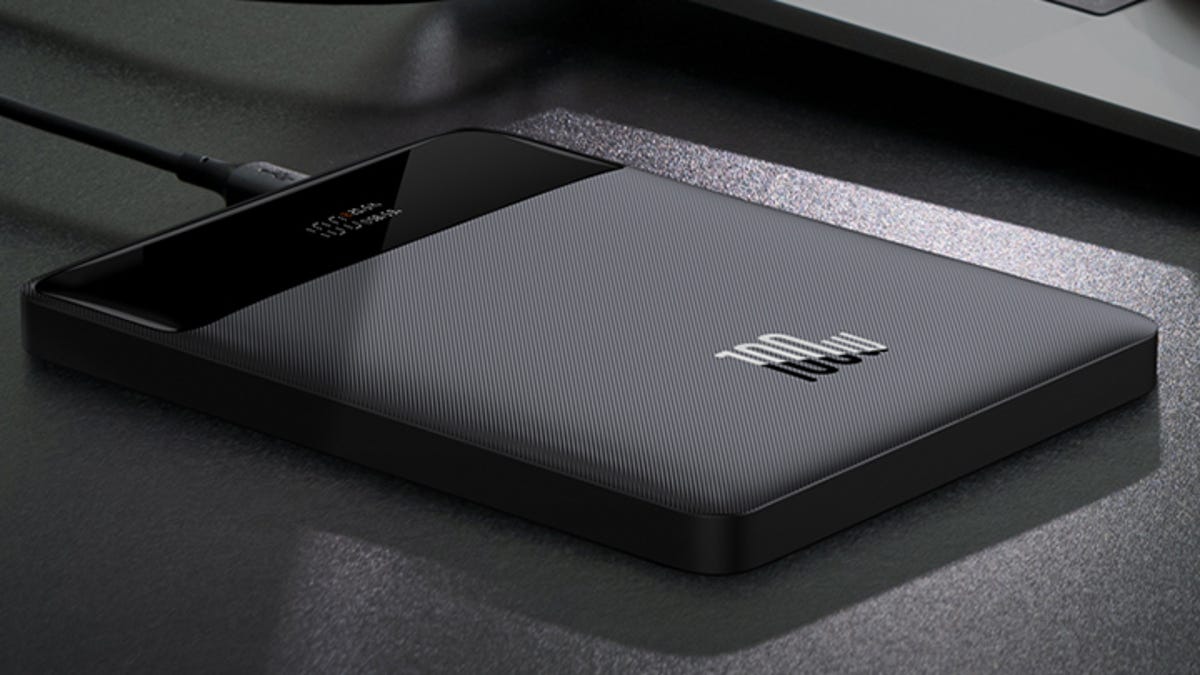 Baseus calls the $100 Blade 100W Power Bank ‘notebook thin’. That depends on your notebook — at 18mm (0.7in.), it’s thinner than a Surface Book or Surface Laptop Studio, but quite a bit thicker than a MacBook Air or Surface Laptop.

Still, it’s thinner than other battery banks we’ve tested, because the Blade is more like a slab than a brick, making it easier to slide into a bag alongside your laptop but less likely to fit into a pouch or pocket. The distinctive textured front is easy to grip but doesn’t stop a phone you perch on top of the Blade from sliding right off.

What this form factor gives you is a large and legible screen to show the charging details. Having a percentage rather than a ‘guess what the blob means’ set of indicator lights makes it much clearer how much capacity your power bank has left.

When you plug a device in to charge from the Blade, the screen shows you a dynamic view of how that’s going, with the percentage charge left on the power bank, the power draw in volts and amps and how long the power bank will last in hours and minutes. We compared the power draw shown on the display with a USB-C PD cable with a built-in power readout: it’s fairly accurate, but we’d like to see the option to switch to show it in watts rather than the volts and amps (which you multiply together to get the wattage).

The battery life shown can change fairly quickly: if you have a device that does fast charging (and the Blade supports multiple quick-charge standards), it can pull power quickly at a high rate, which can make it look as if the power bank won’t last for very long. But as the battery level in the device you’re charging goes up, the charging rate will slow down, and the power bank gets depleted more slowly. Or if you start streaming internet video or playing a game that pushes the GPU on the device you’re powering, expect the time left to drop far more quickly.

This is most useful when you’re charging something like a laptop that tells you how long it will take to get up to full charge: it’s easier to work out that when a Surface Book 3 tells you it will take 47 minutes to get to full charge that the 38 minutes of charge on the Blade will get you most of the way there than to assume the 68% capacity left on the power bank will be enough.

With four charging ports (two USB-A and two USB-C) it would be useful to see details for everything you plug in. Annoyingly, Baseus doesn’t take advantage of the available space for the screen that the wide and thin form factor offers: the display only uses the central area, which means there’s only room for one set of figures. The much smaller screen on the Chargeasap Flas Pro Plus power bank actually gives you more information, even though the Blade’s display is much easier to read. It also seems somewhat random which device you’ll get the power output for: usually it switched to the higher-power device we were charging, but not always.

The Blade has the same irritating display quirk as the Scout Pro: when you’re charging it up, the percentage charged figure flashes continuously, which can be rather distracting. More usefully, the charge level also flashes when it drops below 10%.

Baseus says the Blade will charge fully in about 90 minutes with a 65W charger (or twice as long with a 30W charger). We found it could be slightly faster than that.

We used the same Apple USB-C power supply to charge the Blade that we’ve used for other power bank reviews. Using the USB-C cable that comes with the power bank (full marks to Baseus for including a cable, since having the wrong kind of USB-C cable makes charging much slower), it charged at a higher rate than many of the power banks we’ve tested — 60W rather than the 44W that the Chargeasap power bank charged at on the same charger, for example.

Baseus also sent us its 65W charger, which looks very like a traditional laptop charger but has two USB-C and two USB A ports (and two mains sockets so you can use it as a mini-extension strip, although we’ve only seen a US version of this). That also charged the Blade at 60W (peaking at 62.7W), which makes charging the battery fast, reaching 83% charge in an hour. That slows down a little as the battery charges (with the power draw dropping to 50W) and a full charge took about 85 minutes.

Perhaps because of the wider, flatter shape or the grooves cut into the surface, we noticed the power bank didn’t get hot while charging, which many similar devices do. We also like the convenient way that devices start charging as soon as you plug them in to the Blade: you don’t have to tap a power button to start.

How many of your devices you can charge with the Blade obviously depends on how power-hungry they are. In 45 minutes, we were able to take a Surface Duo that was down to 45% battery back up to 88% power, which only took 13% of the Blade’s capacity (although we weren’t using the phone while charging it).

Despite the large 100W engraved on the front of the Blade, we didn’t actually see the promised 100W charging from a single USB-C port.

When we plugged in laptops that are supposed to charge at 100W over USB PD like the Surface Book 3 and Surface Laptop Studio, they actually charged at around 60W (for the Surface Book) and 60-75W (for the Laptop Studio) rather 100W. The Laptop Studio briefly drew 88W and 92W when charging, but it also cycled down to draw as little as 50W even with its battery only half-charged, before settling at around 60W. Both devices dropped to drawing 48W as they got closer to full charge, but that’s as expected and indicates that the laptop is requesting lower power rather than that the power bank can’t keep up.

It didn’t make a difference whether the laptop we were charging was the only device connected or one of several we were charging: we still saw 60W rather than 100W charging. It’s possible you would see 100W charging with a different laptop, but the Chargeasap power bank we tested did manage to deliver 100W to the Surface Book 3 from a single port. Still, 60W charging is useful: when we plugged in a Surface Book 3 with 45% battery charge, it took 50 minutes and 76% of the Blade’s capacity to take the Surface Book 3 from 45% to 90% charge while we were using the laptop.

Anything you plug into the USB-A ports will get a maximum of 30W each.

The Baseus Blade doesn’t have the largest capacity, it didn’t output the full 100W on any one port in our tests, and while clear, the display only shows details for one device. But if you can put up with the blinking display while it charges, the power bank charges quickly and its thinner form factor may be more convenient to carry while still giving you a decent battery boost.

When you’re out and about, the last thing you need is anxiety over whether your devices — laptops, tablets, smartphones — will last out the day. Portable power banks are the answer. Here are a couple that will perform well; for more, see ZDNET’s roundup.

This sub-$100 power bank will easily meet your laptop charging needs, and then some

The 5 best portable power banks: Top up your mobile devices