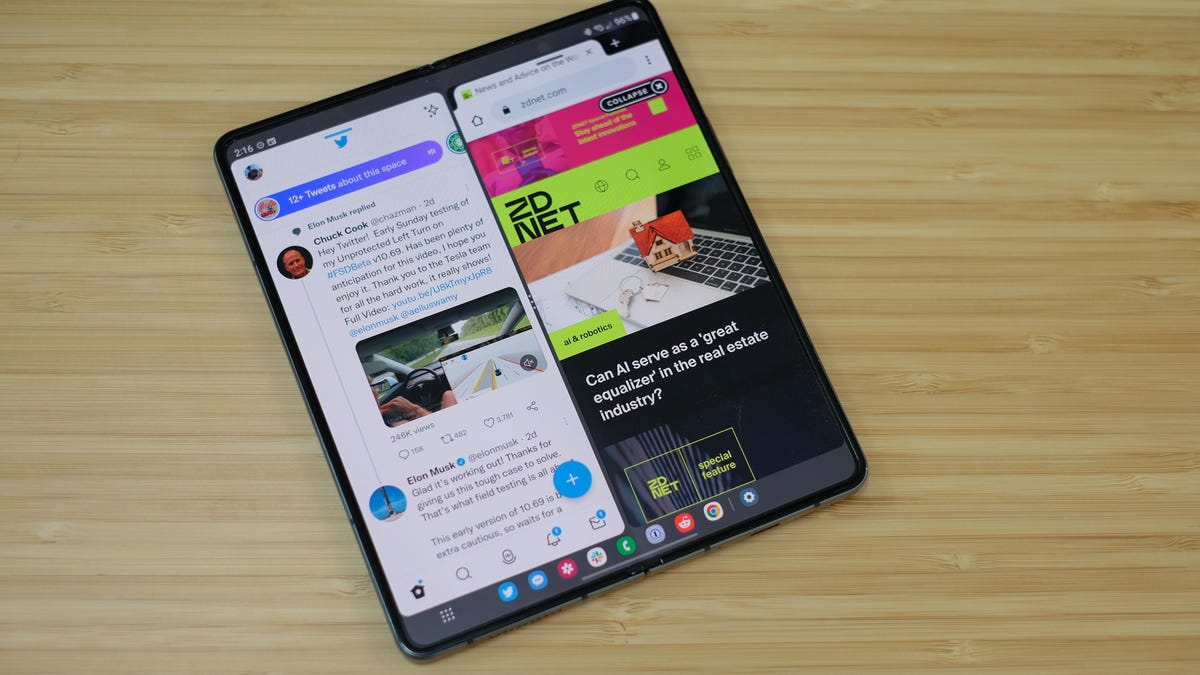 Samsung’s Galaxy Z Fold 4 is a worthy successor to the Galaxy Z Fold 3. And while it’s still an expensive entry into Samsung’s high-end foldable experience, it’s a multitasking powerhouse that’s left to compete with itself.

Review: The Galaxy Z Fold 4 is a high-priced ticket to productivity heaven

I’ve been using the Z Fold 4 for the last couple of weeks, after using a Galaxy Z Fold 3 for the past year. There are some pretty big upgrades in the latest Fold, and some aspects of the Z Fold 4 that feel stagnant and are worth pointing out.

Below, I’ll walk through three of my favorite features of the Z Fold 4, and a couple of things that I wish Samsung would push the envelope forward with.

Review: The Galaxy Z Flip 4 solves these two big problems for me

By far my favorite feature that’s currently exclusive to the Galaxy Z Fold 4 is the fact that it runs Android 12 — a tablet and foldable optimized version of Android — which includes a new taskbar. The taskbar lives on the bottom of the Z Fold 4’s main display and houses up to eight of your favorite apps for quick access at all times.

The apps are available in the taskbar mirror of those that you put in the main app dock on your home screen. But instead of having to go back to your home screen to switch to an app, it’s always there and waiting for you.

On the Z Fold 3 I would randomly use multiple apps at the same time, but pinning the edge panel to the side of the screen wasn’t as convenient or intuitive as the taskbar.

Also: How to get the most out of the Galaxy Z Fold 4’s new taskbar

The best way to say it is that the taskbar makes the Z Fold 4’s main display feel more like a tablet that begs to be used as a multitasking tool. Prior to the taskbar, the Fold’s larger screen felt, at times, like a really big phone display that was only sometimes used to do more than a single task at a time.

Gboard is finally optimized for foldables

This isn’t a feature that’s specific to the Z Fold 4, but it’s one I discovered while using Samsung’s latest large-screen foldable. Google’s keyboard, Gboard, finally has a split-screen option that greatly improves the overall typing experience on the Z Fold 4 — and my personal Z Fold 3.

Samsung’s keyboard comes preinstalled and activated on the Z Fold 4, but I’ve always hated typing on it because it feels like you’re typing on very small keys, especially on the cover screen. Gboard, however, has always been my go-to Android keyboard because it feels more accurate, and it has larger individual keys.

The cameras are a welcome upgrade

For a device that’s priced at $1,800, it’s always been a bit of a head-scratcher why Samsung hasn’t included a better camera system on the Fold.

Samsung has finally brought a high-end camera system to the Z Fold lineup with the three-camera setup on the Z Fold 4. Instead of three 12-megapixel shooters like the Z Fold 3 has, the Z Fold 4 has a 50-megapixel main camera, a 12-megapixel ultra-wide, and a 10-megapixel telephoto camera with 3x optical zoom. It’s a camera setup that’s nearly identical to what’s used in the Galaxy S22 Plus, but falls short of the S22 Ultra’s camera setup.

Review: The Galaxy S22 Plus

When testing the Z Fold 4, I had zero hesitations in taking photos with the foldable phone instead of reaching for my iPhone 13 Pro Max, which is what I’ve been doing for the last year while carrying the Z Fold 3.

As cool as it is to have a smartphone with a foldable display, I do wish the technology was further along. It’s a minor nitpick, but it’s something I feel that’s worth pointing out — the Z Fold 4’s display still has a crease, and it doesn’t fold flat when closed.

To be clear, the crease in the Z Fold 4 is less visible than the Z Fold 3’s, but it’s still there. Writing on the screen with an S Pen, you still feel a dip when you go across the crease.

As far as the phone folding closed and not being flat, well, that’s still a thing. You can see there’s a larger gap on the side nearest the hinge, while the opposite side is nearly touching and closed flat.

Again, I admit I’m nitpicking here — the Z Fold lineup is proof of Samsung’s continued work and dedication to innovating foldable display tech in smartphones, but as the fourth generation Fold, I had hoped for at least one of these two complaints to be resolved.

If you have the Z Fold 4 in your hands now, what are your favorite features? Or what do you not like about Samsung’s $1,800 foldable? Let me know in the comments below.

Some Dell XPS 13 Furthermore laptops have an adhesive dilemma, the monitor could slide off